Spontaneous Physical Activity (SPA) and the Immune System (IS)

Within Salutogenese medicine, it states the following:

“In any disease, movement is always part of the solution.”

“Movement is the cause of all life.”

The above has long been known and is increasingly substantiated by scientists. I made a summary of an article from 2015 (!) by Leo Pruimboom, Charles L. Raison, and Frits A. J. Muskiet.

What is Spontaneous physical activity?

Evidence that SPA is caused by ancient stress factors such as food scarceness comes from research on people suffering from anorexia nervosa and individuals with obesity, that is, the opposite phenotype. However, SPA and even hyperactivity in periods of reduced food availability are not unique to humans: animals need to be active to search for more food if the food supply is limited, as is commonly the case in the natural habitat. Already in 1922, psychologist Curt Richter observed that if food is served for a limited period of time, the meal is preceded by an increase in physical activity. This phenomenon is referred to as “food anticipatory activity” {FAA}, and the biological explanation for FAA preceding meals is similar to the above-mentioned evolutionary approach to human SPA in starvation.

The SPA pathway, activated through food restriction, seems to depend on orexin and dopamine. Activation of orexin receptors increases physical activity, while orexin is released in response to food restriction.

Dopaminergic pathways (dopamine pathways, dopaminergic projections) in the human brain are involved in both physiological and behavioural processes, including movement, cognition, executive functions, reward, motivation, and neuroendocrine control. Each pathway is a set of projection neurons consisting of individual dopaminergic neurons. 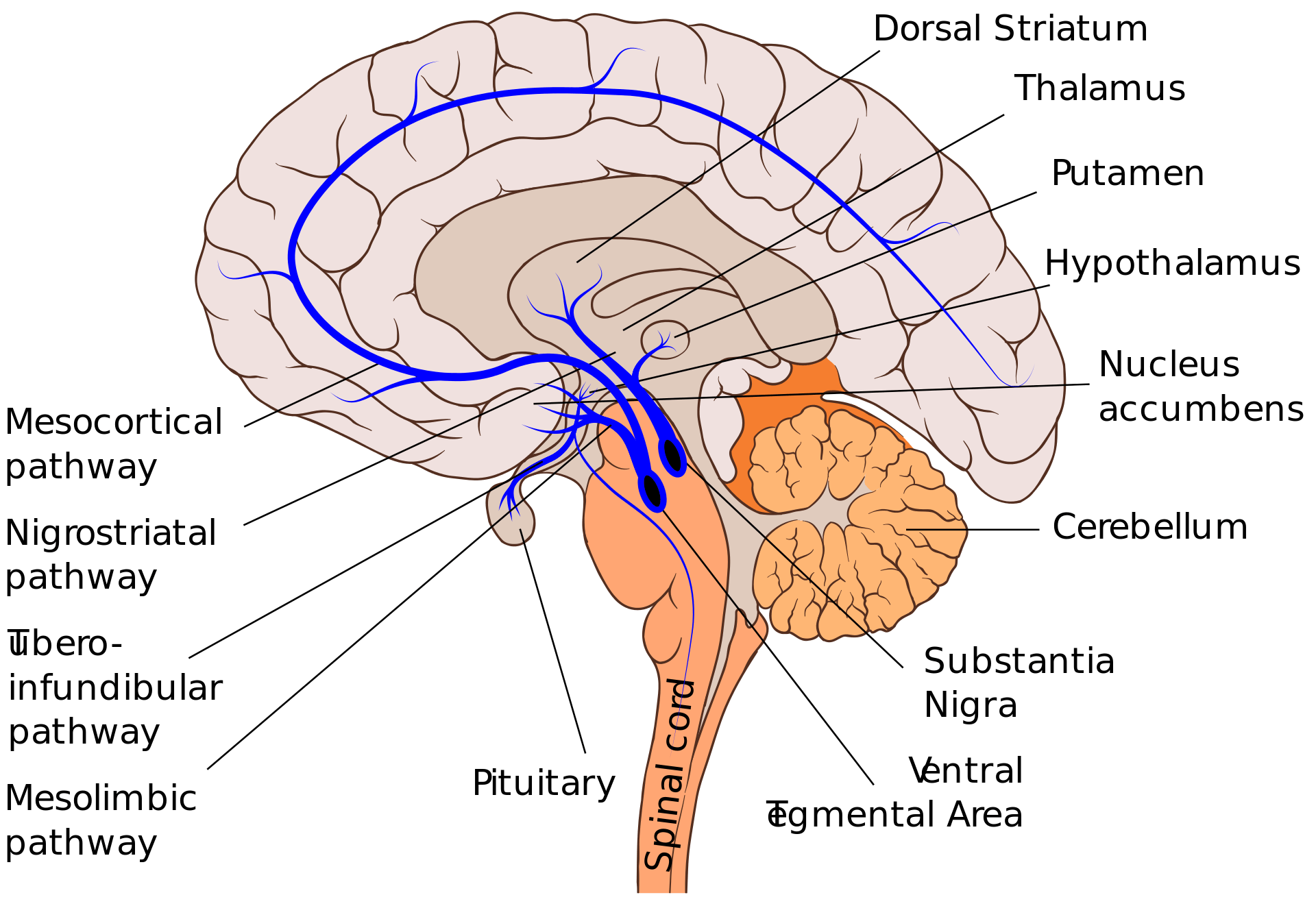 Dopaminergic pathways responsible for spontaneous physical activity have gained importance during evolution. These dopaminergic neurons belong to the group of the so-called emotional motor neurons, and these neurons are part of the behavioural column.

As mentioned before, the dopaminergic motor system belongs to the behavioural column, and this system facilitates and permits behaviour. The opposite response is observed in people with a variety of diseases such as fibromyalgia syndrome, multiple sclerosis, panic disorder, obesity, and Parkinson’s disease, all of whom show nonpermissive behaviour such as exercise avoidance.

Dopamine-induced preprandial SPA firstly saves energy for brain function and secondly helps to induce a protective anti-inflammatory response of the immune system after food intake through upregulation of the production of lactoferrin and its accumulation in dopaminergic neurons, might protect against neurodegeneration and Parkinson’s disease.

As mentioned before, several specific aspects of human locomotion have made it possible to save energy for the brain, but this is not the only way the brain gained access to more resources to grow and develop during hominin evolution. Regular exercise shapes the immune system, creating a highly protective anti-inflammatory phenotype that maintains protection against possibly lethal invaders while saving energy.

Because regular muscle contraction diminishes the need for proinflammatory activity of the innate immune system, we suggest that muscles should be considered part of the immune system. The phylogenetic development of muscles, together with that of human locomotion, increased fat storage. Differences in glucose transporters between muscle and the brain have been responsible for patterns of energy allocation that enabled the brain to grow to its evolutionary maximum of 1,490 mL approximately 30,000 years ago.

Throughout hominin evolution, our ancestors encountered dangerous situations, such as violence and dehydration, that threatened the survival of the individual or the species and usually triggered a survival response in which more ancient systems tend to dominate younger ones [129], although brain functions and anatomy seem to maintain the highest priority. The normal response to survival threats is SPA, and SPA is capable of controlling the immune system by saving energy for the brain during stressful situations.

The absence of SPA or voluntary exercise, as is occurring in sedentary people living modern lifestyles, provides a framework in which the immune system overrides the interests of the normally selfish brain, which could be the reason why brain size shrank in the last 30,000 years from the maximum of 1,490 mL to the current average of 1,350 mL. 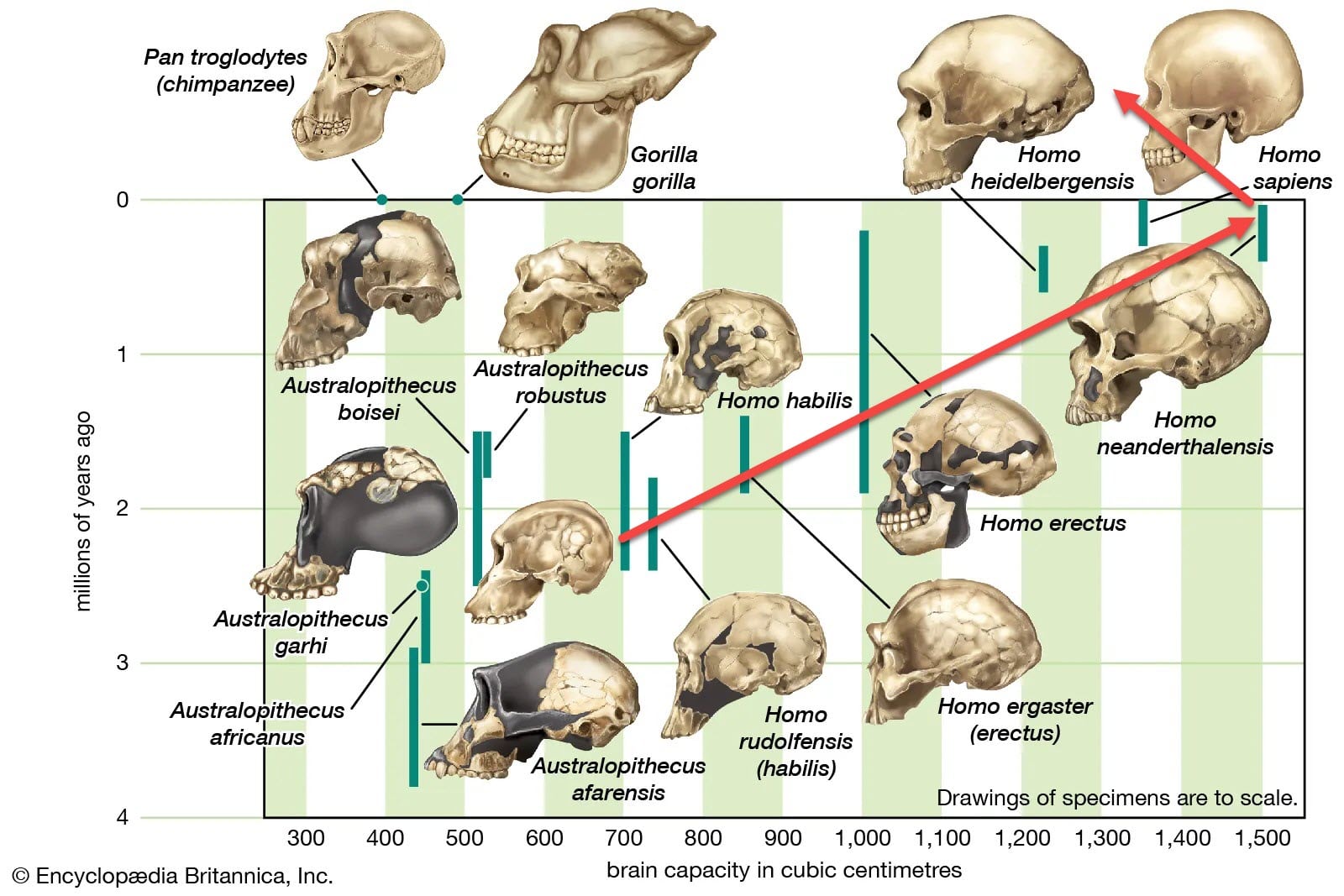 Cranial capacity of members of the human lineage

So start exercising today, and keep in mind:

“The best exercise for your health is the next one.”